Commonly used to make cream puffs, is one of the most traditional preparation of Italian and French pastry.

“Choux” means cabbage (in French), because of the rounded shape of the cream puff that resembles little cabbages.

As for many preparations, the origin of choux pastry is not clear:

Choux pastry is basically made by 4 ingredients:

Salt and sugar are optional.

Choux pastry is cooked twice, once on the stove and again in the oven (or deep-fried).

(cooking in water is possible, but not for pastry preparations).

First heating is fundamental to the starch in flour to gelatinize, while during the second heating the choux develops its roundness.

I like comparing choux pastry to puff pastry. As a matter of fact, both can be used for salty or sweet preparations and they are characterized by a physical/mechanical leavening.

In the article about puff pastry this leavening (result of a combined action of heat and steam) is explained. In choux pastry the mechanism is the same:

water inside the dough, when heated, evaporates but it is trapped by a thin crust made of flour, butter and eggs, that causes the choux pastry to swell.

This phenomenon is emphasised in Choux au Craquelin.

Usually “litre” is the unite of measurement but I prefer to use the total weight of the final dough as a reference, in order not to have any excess.

You can make choux pastry using just water, but it is not uncommon to find recipes where water is partially or totally substituted by milk:

milk, as already said in other articles, contains lactose (a sugar), and this causes a stronger colour.

The most used fat is butter, but choux pastry can be made also with oil, margarine or lard.

The higher is the content of fat, the more the cream puff will be crumbly and rounded with a smooth surface.

Less is the fat (compared to the flour), lighter the cream puff will be (with an irregular and cracked surface).

The proper flour should have a protein content around 10/12%.

Protein content should be higher in case of fat rich dough.

Quantity in recipes is approximate because several factors can influence the preparation: boiling time, type of flour, cooking time.

The higher the egg content is, the crunchier the crust will be.

You can use two methods to understand if the right egg amount has been added:

Important: it must not be too thick (low growth, several cracks) or too soft (flat pastry)

Here you can find 5 recipes organized as a function of fat.

My readers know by now that I love to summarize recipes with handy charts;

the following chart contains 5 recipes listed according to their fat content: the “Dose 1” recipe has a light pastry while “Dose 5” contains a large quantity of fat. The total weight of the pastry is always 1 kg.

Add water, cubed butter, salt and sugar into a pan and bring to a boil; add the previously sifted flour, a little at a time, with the saucepan away from the stove; return to the heat and cook for approx. 5 minutes, stirring occasionally (until the dough pulls away from the bottom of the pan).

Transfer the dough to a mixing bowl and add the eggs (one at a time, mixing well after each addition, at around 45 – 50°C) and beat the dough.

When the dough curls it is ready for use. Pipe the desired shapes and sizes (large or small shells, eclairs, etc.) on to the baking sheet.

Choux pastry shells are ready when no soft paste remains on the sides: they must “dry-out” entirely.

Bring the oil up to 180°C; you can make round fritters, beignets, Italian zeppole and other shapes.

A practical way to fry your choux pastry is to pipe the shells onto a baking tray and then dip all into the hot oil; the shells will come off in a matter of seconds and you can remove the parchment paper. Turn the shells to brown and fry evenly.

Have a nice dessert! 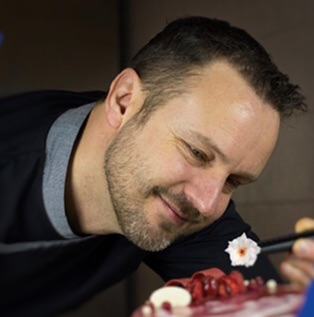 Loris Oss Emer was born in Trento in 1973. After attending Hotel school, specializing in pastry, he managed the family bakery until 2006. In that year he left job as a freelancer to teach, becoming an “arte bianca” teacher at “Istituto di Formazione Professionale” in Levico Terme (Trento), where currently works. Since March 2015 he has been taking care of the “Pianeta Dessert” pastry blog and application (for smartphone and tablet), trying to make this art accessible to everybody